How Many Betting Positions Are There on a Baccarat Table?

So, it’s that simple? Not quite. Why else would the seats be numbered 1 through 15? Buckle up, because we’re about to get down to the nitty gritty of a Baccarat table and discuss its layout.

Home » Guides » How Many Betting Positions Are There on a Baccarat Table?
Guides 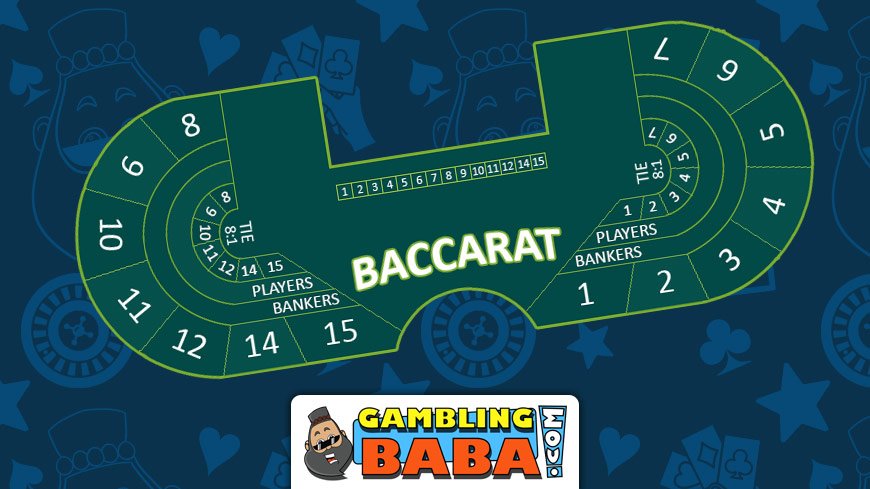 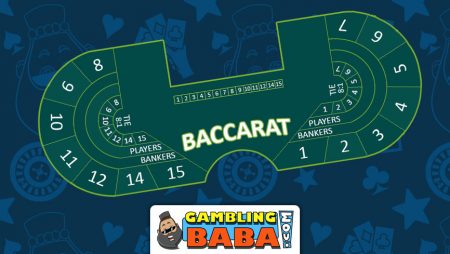 While Baccarat has a small layer of complexity to it, this casino card game is considered to be one the most basic ones to play. As a novice looking to win, you only need to know about the betting positions on the table and how a game round unfolds.

A traditional Baccarat table bears a stadium shape – a rectangle with semi circles on the opposite sides. In the overall layout, one semi-circle has the numbers 1 – 7 printed in a row on its edge and the other has the numbers 8 – 15. These numbers denote the seats.

Interestingly, the number 13 is not considered a seat at a Baccarat table. Therefore, the 13th player sits at the 14th position and the 14th player at the 15th. Keep reading the article to the end or click here to know why.

Observing the image above, you see that the numbers 1 through 15 are also printed toward the center of the semi-circles in a row, but in a smaller font size. The number 13 is missing here as well. All these numbers denote the marks for the following bets:

A player usually bets (places chips) on the areas that have ‘banker,’ ‘player’ and ‘tie’ printed on them. This, of course, is done within the player’s seat number. On some tables, the area for tie bets’ is denoted by the aforementioned numbers printed in the smaller font size.

The Baccarat table also has a U-shaped area cut on the middle portion of one edge. This is the Caller’s place, where a croupier is seated to direct the game. This person, which is known as the ladderman, encourages players to place a bet, calls the cards for the player and banker side, and finally calls the winning bet at the end of the game round.

Two dealers on the opposite side of this ladderman also manage the game and supervise the bets placed on the outer sides of the table. Each dealer has his or her own set of chips for Baccarat players, which they exchange for money.

Because this is a card game with a very low house edge, all banker bets that win are usually subject to a 5% commission. This is where the Commission Boxes (also known as Drop Boxes) on the table come into play.

If you notice the image above, the center of the table has 15 Commission Boxes marked 1 through 15. They are used to keep track of the commissions earned during the game. In each box, banker bets that have won are placed alongside the number of the bettor who won the bet.

Two other areas that are not shown in the image are those of the Discard Trays and Tips Box. The former is where all the cards that have been discarded during the game are dumped. The latter is where a player puts chips to tip the dealer.

Thus, there is another way of interpreting the positions on a Baccarat table. If the 14 seats are not taken into consideration, it features 6 primary positions:

Please note that any player can take any seat on a Baccarat table, except the ones reserved for the croupier and dealers. Regardless of the seat number, seating arrangement, or a bettor’s proximity to the croupier, the game remains the same for all players.

Depending on the type of Baccarat game you play, the table layout and betting positions might vary slightly. There are two major types of layouts:

The American Baccarat table layout is what I just described above. It comes in the stadium shape and features 14 seats numbered 1 – 15. Each player sits against one of these numbers and places a banker, player or tie bet. A croupier and two dealers sit on either side facing each other and running the show.

A Mini Baccarat table layout, on the other hand, is a concise version of the American table – half of it to be precise. It is shaped like a horseshoe and can accommodate a maximum of 7 players who take the seats numbered 1 through 7. It is ideal for novices and is the most common layout you would find when playing Baccarat online.

The dealer sits at the center of the table while the players position themselves along the curve. The basic rules are the same as that of American Baccarat.

Baccarat is so easy and fast-paced that everyone wants to come up with their own variant of the table layout. One such layout is the French ‘Chemin de Fer,’ which can house up to 12 players. Similarly, Punto Banco lets 6 to 12 players take position and Monte Carlo’s variation of Deux Tableau allows 16 players to gather.

Why Is the Number 13 Missing from The Seating Arrangement?

Baccarat is a game of chance and gamblers are a superstitious bunch. Neither purveyors nor purchasers of luck would want to bank on a number such as 13, which is considered unlucky almost worldwide. No one wants to invite bad luck to a place where money is involved. This is why it is given a miss on the Baccarat table.

Similar is the story in Oriental cultures where Baccarat tables often go without a 4. For instance, in Chinese language, 4 is pronounced shi, which means death or corpse. Why should a number associated with something so morbid be taken into consideration when you are trying your luck? Makes sense?

Rules of Baccarat in a Nutshell

Baccarat is a simple guessing game where two sides known as the Player and the Banker compare hand values. The Player is not to be confused with the actual participants of the game. It’s just a betting position.

On every game round, the Player and the Banker side are dealt two cards. Depending on the card values, a third one may also be given to either one of them, or both. The side that gets a value closest to 9 wins.

All face cards and 10s carry a value of 0, while Aces are valued at 1. All other cards are worth their numeric values. If either the Player or the Banker receive a value higher than 9, a subtraction of 10 is made.

For instance, if the Player is dealt 6 of Hearts and 5 of Clubs, this would equal a value of 11, but 10 would be subtracted to make a value of 1. Whenever the Player side has a value of 0 – 5, it is dealt a third card.

To learn more about the game and the circumstances that would give the Banker a third card, check out our article on how to play Baccarat.

Recommended Indian Casino
Instant Withdrawals
SIGN UP AND PLAY
Recommended Indian Casino With Instant Withdrawals!
Baccarat, Casino
Read More
Gambling
Play Baccarat Online at Casino Sites in India
April 5, 2021
0 1450
FREE BONUSES 2022
Indian Online Gambling
GamblingBaba takes fact-checking seriously. To give you the best user experience, providing accurate information is of utmost importance to us. If you see something that isn't right, contact us and we will look into it and make necessary changes. Thank you!